Hurricane Factory was established in 2012. Since then, it has provided an unusual experience in the form of self-corrected flying, also known as indoor skydiving or bodyflying.

The first wind tunnel Hurricane Factory is located in Prague – Letňany. It was built by the Czech Engineering Works Litvínov as their first so-called. wind tunnel. It is a successful project, the tunnel is still in operation and its popularity and number of flight hours is growing every year.

In 2013, after completion of the tunnel in Prague, Hurricane Factory opened another in Slovakia, in the Liptov region. This tunnel is part of a large holiday resort with a water park and is surrounded by the Low and High Tatras and other majestic mountains. Therefore, the tunnel was named Tatralandia.

In 2017 Hurricane Factory opened another wind tunnel in Berlin, Germany. This tunnel differs from previous ones not only in the latest technology and design, but also in its size. The round glass chamber of the Prague and Slovak tunnels has a diameter of 4.3m (14ft). The flight chamber in the Berlin tunnel has a diameter of 5.2m (17ft).

But Hurricane Factory is not just a wind tunnel operator. Mention can be made, for example, of the Knights of Prague, the international competition in 4way Dynamic, which took place in 2013. This competition has helped set the benchmark in organizing indoor skydiving competitions around the world and has also encouraged the development of dynamic flying as a new discipline within the sport.

Another major event organized by Hurricane Factory was 1. FAI Indoor Skydiving World Championships held in 2015. It was the world’s first official tunnel championship organized under the auspices of the FAI International Aviation Association. We are particularly proud of the fact that Hurricane Factory representatives and instructors participated in all five disciplines – Formation Skydiving, Vertical Formation Skydiving, Freestyle, Dynamic 4way & 2WAY.

Hurricane Factory supports many airmen and teams. Some of those who have started and learned to fly in our wind tunnels are at the same time ranked as the world’s top airline. Others fly simply because they enjoy it or want to experience something new and unique.

Strojárny Litvínov is an expert company in the field of conventional and CNC metal machining. They have been cooperating with Hurricane Factory since the company was founded, and since the construction of our first wind tunnel in Prague, their operations have spread throughout Europe. At the same time, their wind tunnels are also operated in Belgium, France, Russia, Spain, Switzerland and Slovakia. Others are currently under construction in Germany, Poland and Italy. 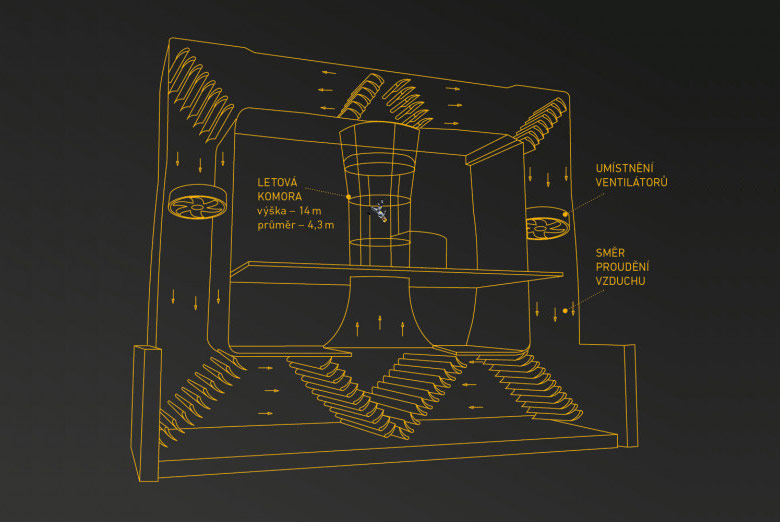 HURRICANE FACTORY IS DREAMS ABOUT FLYING
HAVE become reality

Equivalent to a plane jump

SAFE
AND FOR EVERYONE